With a wingspan of 88 meters and a length of 84 meters, the Antonov AN 225 is considered to be the largest airplane in the world. The winged giant was originally designed as a carrier-aircraft for the transport of the space shuttle Buran, the Soviet equivalent of the American Space Shuttle. This also explains the striking double vertical stabilizer of the Antonov, since strong air turbulence is created at the tail of the aircraft during the piggyback transport of the shuttle.

With the first prototype of the AN 225, produced in 1988, there were no fewer than 106 world records set for weight, distance, and altitude during the course of flight testing, including the particularly prestigious title for the highest take-off weight ever achieved by an aircraft, which weighed in at 506.8 tons. 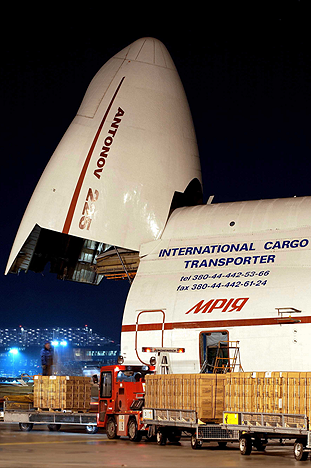 A strong team – During a stopover at the Stuttgart Airport, the biggest airplane in the world, the Antonov AN 225, is loaded with 200 tons of cargo that is delivered by a VOLK Hybrid Tow Tractor HFZ 20 N

But the joy evoked by the triumph was only short-lived. Then the ambitious aircraft project got caught up in the turmoil of world politics only a few months later: as a result of the collapse of the former Eastern Block, a previously started second model could no longer be completed due to a lack of funds, and instead ended up as a spare parts depot for the previously launched airborne version. And even the airworthy AN 225 dozed mothballed for years, facing an uncertain future, until finally in 2001 arrangements for civil use were added to its repertoire. Since then, it is deployed as a charter aircraft for international air cargo and is always very much in demand when especially heavy or bulky loads need to be transported.

Once in a while the AN 225 visits Stuttgart Airport. Over night approximately 200 tons of air cargo are loaded into the 43-meter-long, six-meter-wide, and four-meter-high cargo hold of the machine before it takes off on the following day under the scrutiny of countless curious onlookers, who gather on the viewing gallery to watch it take off.

The distinctive feature of the air giant is the striking double, vertical stabilizer – the curiously appealing design is explained by the original purpose of the AN 225 as carrier aircraft for the Soviet space shuttle Buran 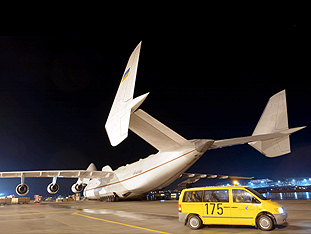 In order to complete loading on schedule, perfect timing is important. The company Apron GmbH thereby relies on a HFZ 20 N VOLK Hybrid Tow tractor. The tractor operates non-stop throughout the entire night in order to bring the freight to the swing-up nose cone of the aircraft, where it is received by several forklifts for loading in the hull.

Since the VOLK Hybrid Tow Tractor HFZ 20 N has significant power reserves at its disposal, it easily masters the hour-long permanent use with maximum loads. The vehicle’s hybrid drive proves itself to be particularly advantageous for airport-related use: while diesel drive enables achieving great distance on the apron, the tractor can be switched to electric drive without jerking and without interrupting the tractive force upon entering the closed cargo halls, so that no exhaust fumes are emitted. And it is also virtually noiseless, which cannot really be said of the Antonov AN 225, with its six ear-splitting engines.