On the roads they cause a great sensation: spectacular wide loads on flat-bed trailers with up to 20 axles. When heavy loads are transported company-internally, they are paid much less notice. Unrightly so, in our opinion.

While heavy loads on public roads are prepared well in advance and often draw large crowds of onlookers, internally they are often dealt with as an everyday routine. And on fenced-in facility grounds they are hardly taken notice of in the absence of an audience.

The minor attention given inner-company heavy transports may also have something to do with the nature of the load. This is due to the fact that on-road heavy transports are essentially only permitted for unseparable loads, meaning goods whose disassembly into several lighter components is not possible either from a technical aspect or would be infeasible from an economic point of view. This requirement is fulfilled, for example, for transformer stations, generator turrets for wind power stations or for turbine wheels, in other words for loads that have not only great weight, but usually also oversized dimensions. These types of load items activate the natural curiosity of the observer simply due to their technical complexity and their considerable material value. The heavy loads transported on company grounds are usually raw materials or raw material-contiguous semi-finished goods, like for example steel coils or slabs. Even primary shaping and recasting tools, like for example casting molds, rollers or presses are, due to the high specific density of the materials utilized, mostly quite compact and therefore not very awe-inspiring transport goods.

VOLK has two real heavyweights for particularly heavy loads in their repertoire: the Diesel Tow Tractor DFZ 150 H with up to 150 tons towing capacity and the Electric Tow Tractor EFZ 100 N, which can handle up to 100 tons.

One of the greatest locational advantages of the German heavy industry – whose individual locations often have more than a hundred-year tradition with their developed infrastructure – proves itself to be one of the greatest disadvantages here: large plants, that were built in the middle of the 19th century, at the onset of the industrial revolution on the outskirts of town, often developed into crystallization seeds of urban development as a result of their enormous growth and the resulting personnel requirements. Therefore, today they are often surrounded by densely built residential and trade areas, so that further expansion on site has long only been possible by adding extra floors on to the building.

But, for example, to pull a 35 ton heavy load over a ramp with an inclination of ten percent from one floor to the next (and after stopping unexpectedly, to also be able to get it moving again), a tractor is required that could otherwise effortlessly pull three times the weight over a level surface. As a consequence the load that is actually transported often remains well below the nominal performance of the tractor unit. 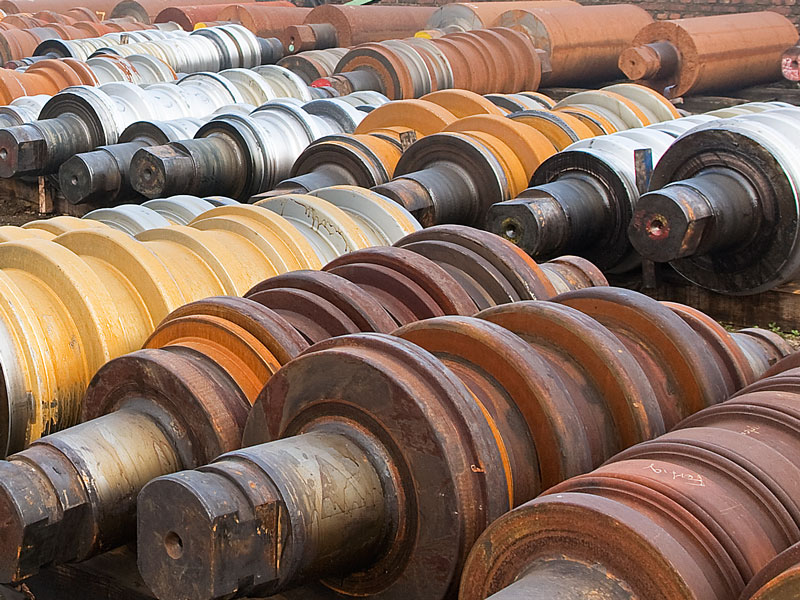 All of these are reasons that make inner-company heavy transports appear to be unspectacular and hardly impressing on the surface. But someone who thinks like that is not even aware enough to succumb to the temptation to measure the allure of a transport assignment according to the characteristics of the goods to be transported – and with it has completely forgotten that this will be difficult to actuate without having an adequate tow tractor.

From a tow tractor perspective, it is particularly the internal heavy transport that presents a special challenge: this requires the tow tractors to be extremely compactly built despite their enormous capacity for their implementation in an industrial enterprise. Here is where work corridors with narrow widths and other infrastructural bottlenecks take their toll: while, for instance, a length of about 3.70 meters and a turning radius of 4.30 meters are perceived of as being the perfect measurements for a 150-ton industrial tractor, the Kings of the Road are also king size in this respect. Even the high access height of a conventional truck would be an unreasonable demand in inner-company traffic. In order to not make the work of the driver end up as endurance training, with the frequent coupling and decoupling procedures, access heights of 80 centimeters or less are stipulated.

And for reasons of emission release, electrically powered alternatives are in demand in addition to combustion engine drives – a particularly challenging requirement considering towing capacities of over 50 tons.

It is therefore no wonder that in view of such challenges the ranks of manufacturers quickly begin to thin out. One of the few suppliers that is strongly positioned in the royal league of tow tractor manufacture is VOLK. The company offers a wide range of tractor units for internal transport needs in the heavy transport sector. The two top models with diesel and electric motors are presented below. 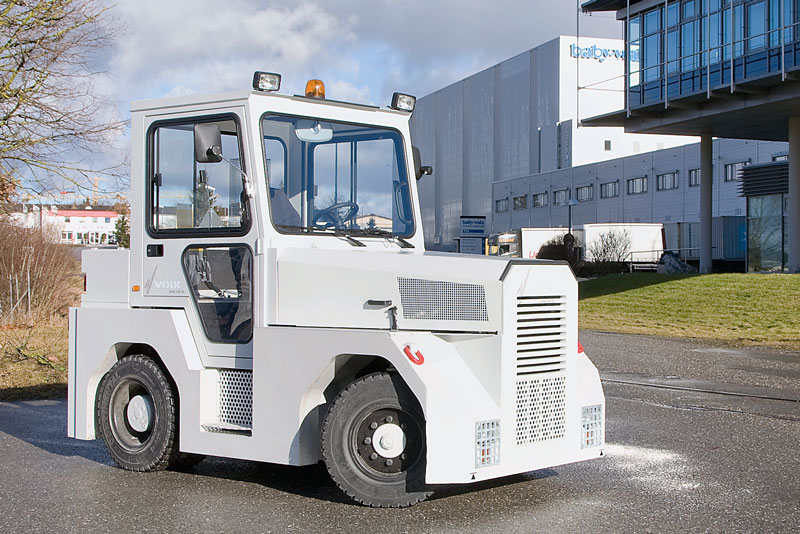 For loads of up to 150 tons, VOLK offers the model DFZ 150 H. With a maximum pulling force of 70.000 N, the VOLK Diesel Tow Tractor DFZ 150 H outclasses just about everything presently available on the tractor market. A Perkins industrial engine with 3.4 liters cubic capacity is responsible for the thrust. With an engine power of 93 kW, it accelerates 150 tons of towing capacity to a speed of up to 8 km/h.

It is a known fact, however, that to pull the heaviest of loads and to safely get these to stop are two completely different matters – especially when using an unbraked trailer. For this reason, the chassis of the VOLK tractor consists of up to 300 mm thick steel plates – there is actually no other way to cope with the constructive assignment to accommodate 12.7 tons of dead weight on a vehicle surface that is just about seven square meters in size. To illustrate this: a Mercedes S Class sedan covers an area which is 50 % bigger.

In order to pull heavy loads and be able to safely brake, tractors need to have a high dead weight – therefore the frame elements are up to 300 mm thick

This clearly shows that the tow tractor is incredibly compact despite its powerful performance. A turning radius of only 4.24 meters speaks for itself. And if things get a bit tight, the sensitive hydrostatic drive proves itself to be extremely beneficial. This enables the surprisingly precise alignment of the colossus.

It goes without saying that the extremely massive construction guarantees maximum stability. Even the high-quality components of the power train are liberally dimensioned, so that the tractor permanently withstands even the toughest strains.

In order to optimize the vehicle for various purposes, VOLK offers an extensive range of accessories. This includes, for instance, a diesel particle filter system that enables driving in an enclosed building. 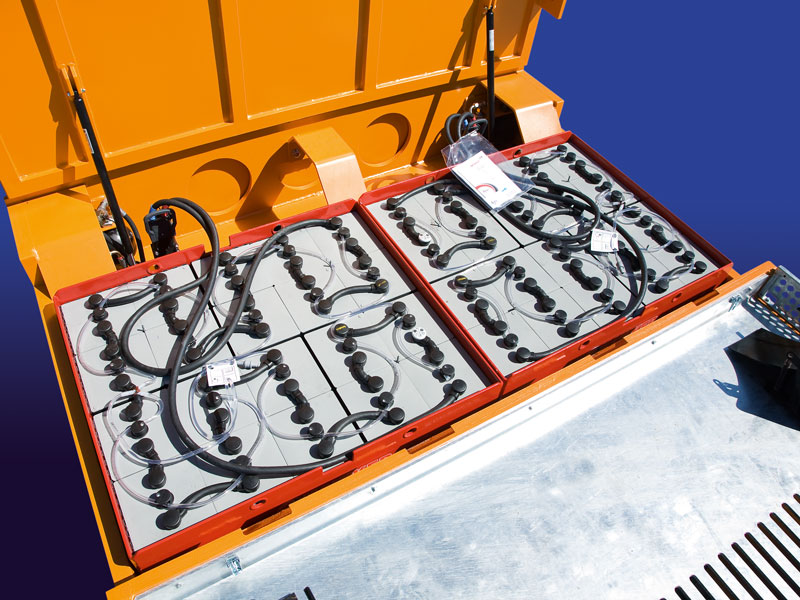 Regarding electric tow tractors, the traction battery contributes to the vehicle weight – at a capacity of 80 V/1.550 Ah, the battery pictured here weighs in at a stately 3.400 kg

VOLK tore ahead in this sector already in the mid-nineties and developed electrically powered tractors with a maximum towing capacity of up to 50 tons – at the time a novelty in the industry. In the meantime VOLK has raised the bar even higher and offers an electric tow tractor for up to 100 tons towing capacity: The model EFZ 100 N. 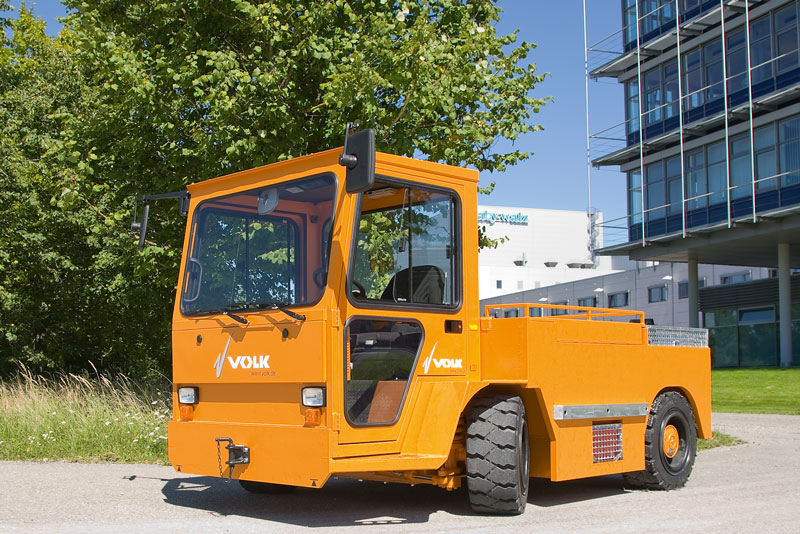 The most challenging part of this innovative development lies particularly in managing the high currents required. Maximum currents of up to 2.000 amperes only require enormous cable cross-sections, but also take conventional control technology to its limits. VOLK has solved the problem with a dual control device. Hereby, two AC inverters model Zapi AC 5 are implemented – each of the two with a maximum current of 1.000 amperes, which are operated in a master-slave configuration.

Even the energy storage presents a special challenge in this performance class. This, naturally due to the fact that towing capacities of up to 100 tons also present high demands on the battery. And if there’s one thing that a large battery needs, it is room. This explains the relatively large vehicle width of around two meters, which however didn’t prevent VOLK from realizing a turning radius of only a little more than four meters. If the traction battery of the vehicle with a capacity of 80 V / 1.550 Ah may well be a superlative for electric tow tractors, the maximum towing capacity of 50.000 N leaves no doubt about it.

The transmission of force is done by means of gigantic tires with dimensions of 28 x 12.5 – 15. In order to guarantee optimal traction even with poor surface conditions, the vehicle has an electronic differential lock, which automatically intervenes as soon as a wheel begins to spin. The wheels are powered by two electric motors, each with a performance of 20 kW (60 minute rating). In comparison with the 500 kW of a wide-load truck in public road traffic, this appears to be quite modest. But even seasoned long-haul truck drivers are impressed by the tremendous torque of two times 500 Nm. For some truckers it is even more impressing that the tedious handling of up to 16 gears absolutely doesn’t exist.

Duel among giants – when a 150-ton diesel tractor takes on an 100-ton electric tow tractor, the outcome appears to be quite clear; the fact is, though, that the electric tow tractor underlies only very tightly because electric motors can be overloaded many times over in the short term

That’s the way it is with dissimilar brothers: they come from different worlds and are destined to live different lives. But when their paths cross, mutual fascination runs high.