The German VDI standard 3586 differentiates the terms “tractors and trucks” with a fine sense of systemization – and that raises the question: Why really? In everyday language almost anything which moves around a company’s premises and is not equipped with lifting gear is called a “tow tractor“. The sociologist and philosopher Niklas Luhmann once made the assertion “The world can be understood by making distinctions“, certainly without industrial trucks in mind. Thus it seems it would be worthwhile to take a closer look at this distinction.

A platform truck is equipped with a fixed platform as a loading area. It differs from a tow tractor mainly because material is primarily transported on the loading area located behind the driver’s cab and not on trailers or other load carriers. 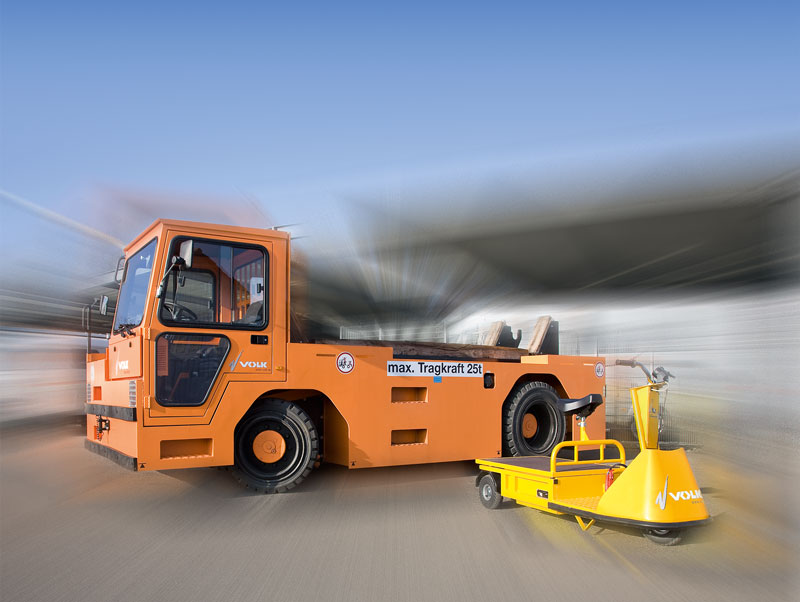 David and Goliath – The VOLK Platform Truck range is designed for payloads ranging from 300 kg to 25.000 kg and is propelled by diesel, electric or LPG drives

From a logistics expert’s point of view, this brings along with it a disadvantage: due to transport on the vehicle’s own loading area, loading and unloading jobs have to be performed during the vehicle’s operating times. So the vehicle has to stop during loading. This can be a disadvantage particularly when internal transport jobs have to be performed very frequently or when the distances to be covered are relatively short. As a result, the loading and unloading times take up a lot of the driving time.

On the other hand, separating two activities is not an end in itself. And it only makes sense when neither activity is performed by the same person. In many cases, however, the driver is the one who is in charge of loading and unloading his vehicle.

This brings up a major advantage of platform trucks: because they can be equipped very easily with various lifting gear, such as a crane or a hydraulic liftgate, the driver can operate the vehicle all by himself. Therefore loading and unloading jobs can be performed without any problems even if a crane or forklift is not available. Thus platform trucks can be used very flexibly.

In addition, they are really convenient when space is very limited in internal traffic, because a platform truck with a comparable transport capacity is more compact than a towing train consisting of a tow tractor and trailer. It takes up less traffic space and features smaller turning radiuses. As handling trailers is not everyone’s cup of tea, the use of platform trucks is also more efficient and safer when the operating profile calls for frequent maneuvering.

Platform trucks are equipped with a loading area for transporting loads – This offers a lot of advantages, especially when maneuvering in cramped spaces 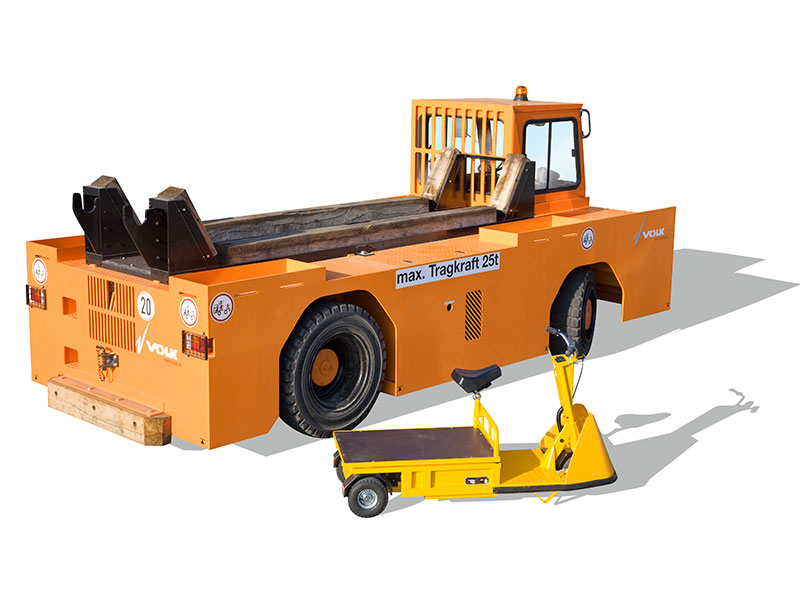 Platform trucks are particularly well-suited for small to medium payloads. A loss of comfort can be expected, however, with higher loads because it is difficult to adjust the suspension so that driving comfort is equally high when the vehicle is loaded or unloaded. In addition, because the load capacity of pneumatic tires reaches its limit when very heavy cargo is transported, the use of SE tires is required, leading to more loss of comfort. Therefore payloads exceeding 25.000 kg are the classic domain of tow tractors.

Although the pointed comparison of specific advantages and disadvantages of tow tractors and platform trucks might seem to suggest it, an uncompromising decision for one of the two alternatives is frequently not required at all. Of course, a platform truck can also be used for towing trailers, and many tow tractors are equipped with a small loading area. However the intended use is determined by the priorities you set in one direction or another. So if a platform truck is what you need, VOLK offers one of the widest ranges available anywhere. 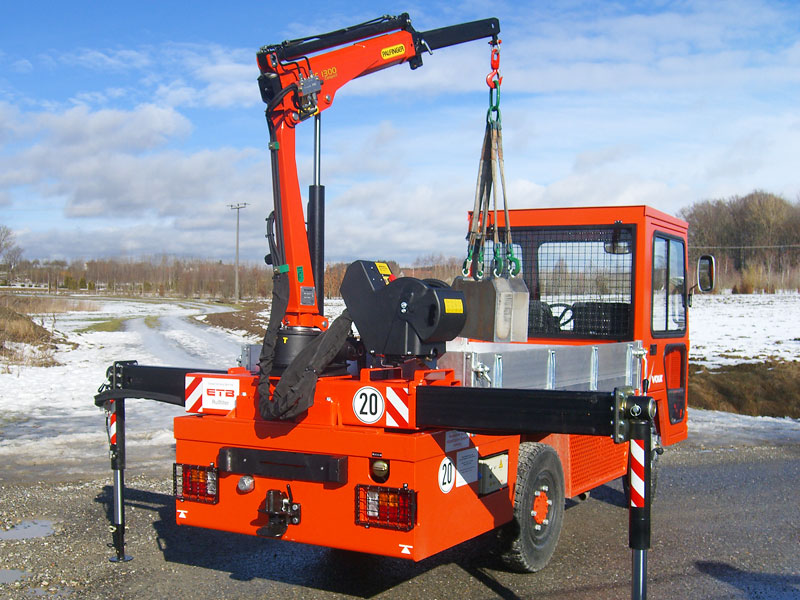 VOLK supplies platform trucks with payloads ranging from 300 kg to 25.000 kg. The swift and agile Roadrunner, a small electric tricycle, which is used, for example, for internal mail delivery or internal transport of small cargo loads, marks one end of this range. The other end features a jumbo vehicle with an empty weight of no less than eight tons and a cubic capacity of four liters. As these two examples already show, VOLK offers its platform truck with all imaginable drive options.

Platform trucks with emission-free electric motors are always the best choice when loads have to be transported inside closed buildings. Thanks to their soundless drive, they are also excellently suited for use in noise-sensitive surroundings such as municipal buildings, hospitals or convention centers.

Diesel drives are particularly suited for load transport in outdoor areas. They have a wide range and can be fueled quickly, thus enabling continuous use almost without any breaks. Finally, LPG drives combine several advantages of electric and diesel drives. Just like diesel vehicles, they can be used almost without any breaks and also make trips in closed buildings possible. Therefore they are especially well suited for mixed use in indoor and outdoor areas. 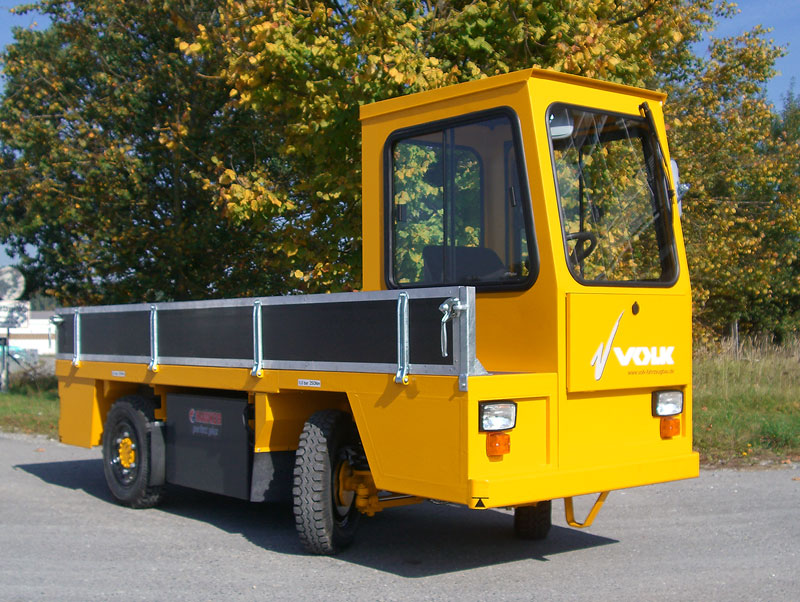 With a wide variety of accessory options, VOLK enables optimization of the vehicle for the respective application. For example VOLK offers a hydraulic liftgate which is specifically suited for transporting bulk goods. The cargo can be protected against climatic influences or theft with a tarpaulin structure or a metal cover with shutters. To transport lengthy material such as rods and pipes, a load-through option is created by “dividing” the driver’s cab in half. Hydraulic liftgates or cranes are also available to facilitate loading and unloading. All these options are hardly practicable in a tow tractor. Thus this short list proves that platform trucks really are a class of their own.

Now the difference between “tractors and trucks” is hopefully a bit clearer. In addition, we have even learned something about epistemology: “Information is definable as a difference which makes a difference” said Gregory Bateson. That is quite true.