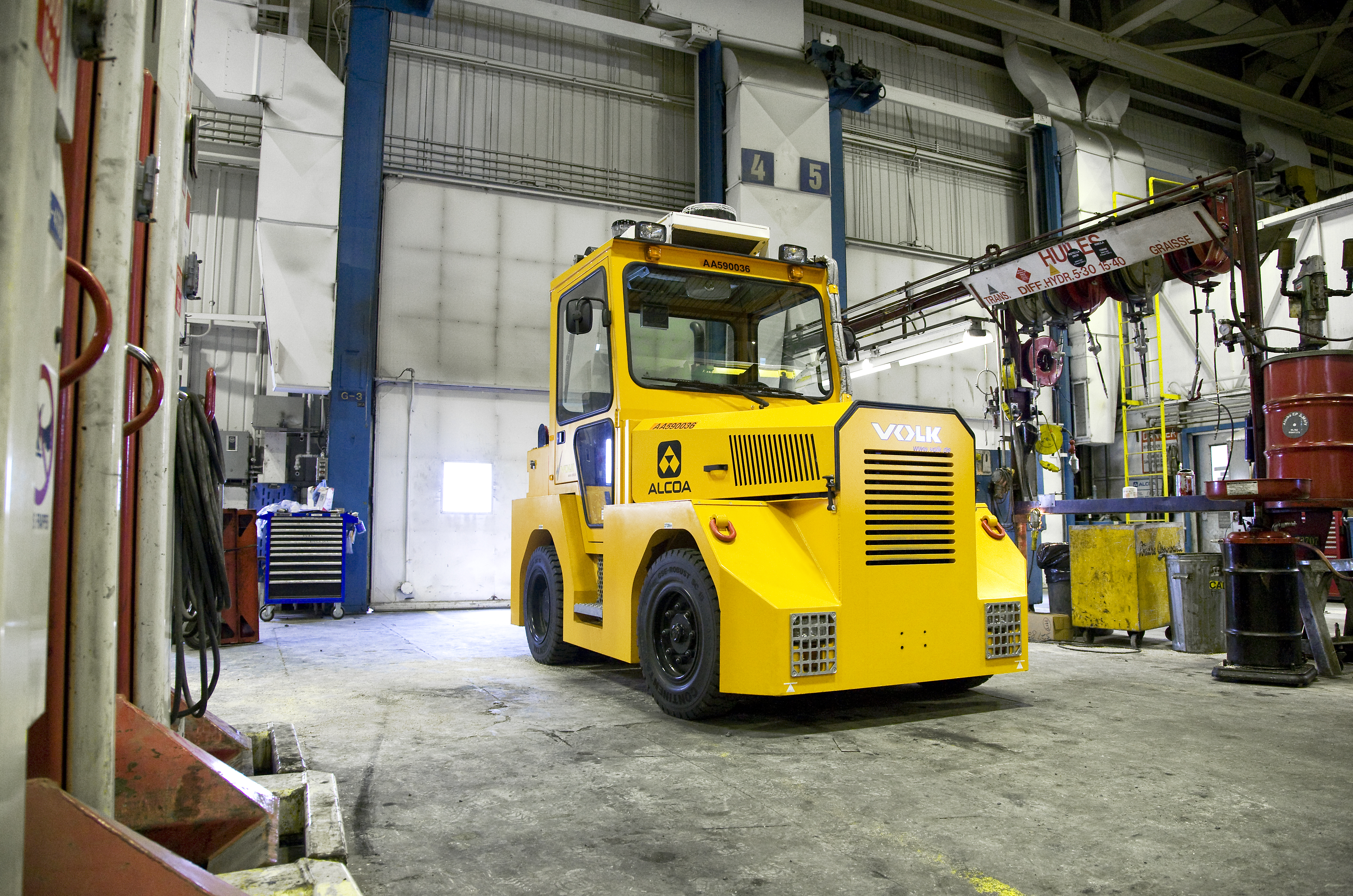 The quaint town Baie-Comeau is located in the middle of the Canadian wilderness, about 400 kilometers northeast of the provincial capital Québec City. Not many people would suspect that the aluminum group Alcoa operates North America’s second-largest aluminum smelter in this small town of 23.000 souls. A main factor which tipped the scales in favor of this site was the town’s convenient geographical location on the junction of the Manicougan River and the St. Lawrence River.

Several gigantic hydroelectric dams built on the shores of the Manicouagan River generate large amounts of low-cost electricity and meet the insatiable energy demands of the aluminum smelter in Baie-Comeau. The plant has an annual consumption rate of approximately 5.6 million megawatt hours (MWh).

The St. Lawrence River, which the Manicouagan River empties into shortly above Baie-Comeau, has been the region’s gateway to the world since the days of the first French settlers in the 17th century. Thanks to the river’s broad delta opening here toward the Atlantic Ocean to the awesome width of 50 kilometers, even large freighters can moor in Baie-Comeau. This enables the cost-efficient delivery of raw materials for aluminum production (mainly aluminum oxide and graphite) and shipment of aluminum for the global market on the return journey. Both are essential because even though Canada is the world’s second-largest aluminum exporter, it does not have any bauxite mines and is therefore dependent on raw material imports, mainly from South America and Australia, for aluminum production.

The Alcoa plant in Baie-Comeau was built in 1957 and grew rapidly in the following years. Today about 1.600 workers produce 400.000 tons of primary aluminum per year. For many years Baie-Comeau was the largest aluminum smelter in North America until 2005 when it lost this title to its competitor Alcan in Sept-Îles, a small town located about 230 kilometers away. 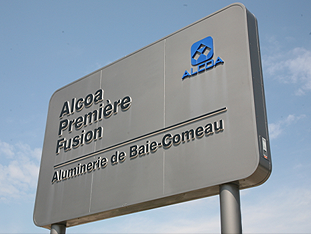 Aluminum is produced by means of fused-salt electrolysis. In this process aluminum oxide, which normally has a melting point of 2.050 degrees Celsius, is dissolved in an electrolytic bath of molten cryolite. As a result of a special chemical condition – the so-called eutectic reaction – the melting point is lowered to just 960 degrees Celsius. An electric current is then passed through the melt created by this process via electrodes. As a result the aluminum is deposited on the negative electrode or so-called cathode, while oxygen is generated on the positive electrode or so-called anode. This oxygen reacts with the carbon of the anode, thereby forming carbon monoxide and carbon dioxide compounds.

The high melting temperature of approximately 1.000 degrees Celsius and the immense currents of several hundred thousand amperes are the reasons for the tremendous amounts of energy required for the production of aluminum. Although the energy costs are less than three US cents per kilowatt hour (kWh) due to the proximity of power plants and the immense purchase quantities, they comprise approximately 30 percent of the total operating costs of a modern aluminum plant. 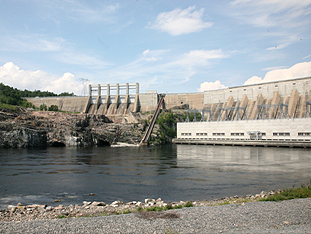 The electrolysis process takes place in a total of approx. 1.000 electrolysis cells. These cells are large tanks which contain the molten metal. Graphite anodes are immersed into these containers from above, whereas the cathodes are embedded in the base plates of the pots. The advantage of this system is that the molten aluminum deposited at the bottom of the pots can be siphoned off easily.

The deep water port of Baie-Comeau on the shore of the St. Lawrence River – Usually large freighters are employed to deliver the raw materials required for aluminum production and to transport the prefabricated aluminum ingots to customers around the world 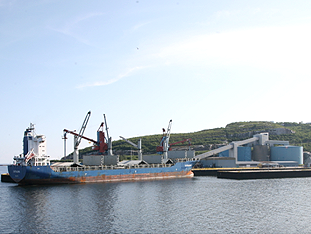 Afterward the molten aluminum is transported in special pots to the casting house where it is cast into rolling ingots and billets. Alcoa uses VOLK DFZ 120 H Diesel Tractors for the transport of molten aluminum. These tractors convinced the directors at Alcoa for several reasons:

Possibly the most important criterion was VOLK’s decades of experience with transport tasks in aluminum plants which have a large number of specific requirements: For example, due to magnetic fields created by the extremely high currents in the electrolysis cells, the vehicles have to be equipped with special shielding. Because of harmful aluminum dust, the driver’s cab requires special filter systems for air purification. Permanent overpressure ensures that harmful dust cannot enter the driver’s cab by circumventing the filter systems and air conditioning system. Because aluminum dust can also damage the diesel engine, special air filter systems have to be installed there, too. This list could be continued ad infinitum; however these few examples should already be sufficient to demonstrate that many years of experience and know-how are required to design vehicles suited for extremely demanding uses and jobs in aluminum plants. 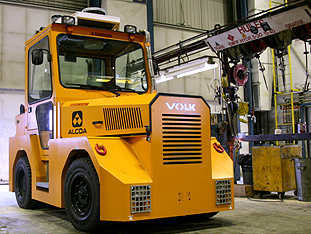 The extremely sturdy design of the VOLK DFZ 120 H Diesel Tractors and the high quality of the installed components were also very important to Alcoa because the vehicles are used in continuous multi-shift operation for about 6.000 operating hours per year – that is almost 20 hours per day. As a result, already during the warranty period the hour meter readings of the tow tractors are higher than those attained in most other industries only after several years. In addition, process industries such as the aluminum industry are known to be particularly susceptible to unexpected vehicle breakdowns. Therefore high vehicle availability and minimum downtimes are essential.

Set in stone – The Alcoa plant site extends over a length of approximately five kilometers, and because of the rocky underground, large sections of the site had to be literally blasted into the rock

The smooth hydrostatic drive of VOLK DFZ 120 H Diesel Tractors was also a big advantage because smooth driving is not simply a question of comfort when molten aluminum is towed. To ensure safe braking of this delicate towed load at any time, the DFZ 120 H have a very high vehicle weight of approximately ten tons. The special challenge is to place this enormous weight in an area as small as possible in order to retain the compact dimensions of the tow tractor. VOLK also met this challenge with a totally convincing solution: Just 3.20 meters long and 1.60 meters wide, the VOLK DFZ 120 H Diesel Tractors take up less traffic space than a VW Lupo sub-compact car. The extremely small turning radius of just 3.72 meters is certainly unique in this performance category.

The Canadian province of Québec is known for its ruggedly picturesque landscapes, rock formations created by glaciers and magnificent natural wonders, such as the world-famous Tadoussac whales which can be observed in their natural habitat along the shores of the St. Lawrence River. Our trip today to Baie-Comeau has certainly shown us that Quebec has in store not only many amazing tourist highlights but also a wide range of technical treats. “Je me souviens” is the official motto of the province of Québec – the motto means “I remember”. And we also enjoy remembering.