“Comparison n’est pas raison”, as a French saying has it – “Comparisons are odious”. But what does that matter? Odious comparisons are often the most interesting. Some things are clearest when they are seen against a contrasting background. Unconventional comparisons therefore often offer a chance for surprising insights – for example the comparison between an interceptor plane and a diesel tractor. But do you think that apples and oranges are being compared here? Perhaps. But always comparing Golden Delicious with McIntosh is also a little boring after a while.

To come straight to the point: jet airplanes are obviously unsuited to towing loads. Not only do they not have a towing hitch, there is also the problem that most loads would be greatly affected by the more than thousand degree exhaust gas stream. For VOLK Managing Director Dr. Matthias Baur, his three-year-old son Marc’s question as to whether he couldn’t build a tow tractor with a jet engine seemed therefore easy to answer. And yet a comparison between fighter jets and diesel tow tractors provided a few interesting insights. 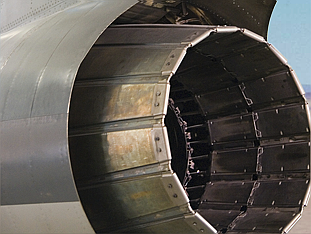 “Give me a ticket for an aeroplane, ain’t got time to take a fast train” – The General Electric engine of the Starfighter has an output of 30.000 HP and accelerates the aircraft to a breathtaking speed of 2.400 kph

For this comparison we selected the F-104 Starfighter. An aircraft type that established its legendary reputation by being the first airplane to fly at twice the speed of sound and able to climb to an altitude of more than 100.000 feet (approximately 20 miles). Due to its lean, elongated fuselage, the airplane, which was finally decommissioned 2004, is regarded by many today as the most elegant jet that was ever built. A genuine legend indeed.

The VOLK Diesel Tow Tractor DFZ 150 H is not a legend, but rather a work horse. One with brute force however. With a maximum towing load of 150 tons, the truck is currently one of the most powerful industrial tow trucks worldwide.

The GE engine of the F-104 had the almost unimaginable output of 30.000 HP, which lent the jet its nickname “missile with a man in it”. It was the first plane to hold the world speed record, the world altitude record and numerous climb rate records at the same time. Even today, the Starfighter can still easily hold its own in these categories with much more modern fighter planes such as the F-16 or the F/A-18. Mastering these immense flight characteristics completely without the aid of an on-board computer was a real challenge for the pilots at that time – a task requiring years of training, maximum concentration and lightning reflexes. On average, Starfighter pilots had to take a decision every 3.4 seconds. Even experienced pilots had a pulse rate of up to 170 beats per minute during low-level flights.

The VOLK Diesel Tow Tractor DFZ 150 H does not have an on-board computer either and one might argue that, at a maximum speed of 25 kph, this is not really necessary anyway. Overall, things are a good deal more leisurely in the DFZ 150 H. However, appearances are deceptive, because although its Perkins diesel engine balances a comparatively modest 139 HP on the crankshaft, a comparison of the performance specifications is very surprising.

The F-104 achieves a thrust of 47.5 kN and with a connected afterburner a maximum of 70.2 kN. In a direct comparison with a VOLK DFZ 150 H, the jet would therefore lose hands down. With a maximum drawbar pull of 75 kN, the tractor would easily tow it from the runway even with the afterburner switched on, and very gently at that, at a speed of around 4 kph. “Haste makes waste”, you might think. Or: “Still waters run deep”.

The performance category is therefore a draw: clear advantages of the Starfighters in terms of speed, surprising superiority of the VOLK DFZ 150 H in the sub-category of pulling power.

Everything’s bigger in Texas – The pilots of the German armed forces who underwent basic pilot training at the Sheppard Air Force Base in Texas from 1966 onwards, joked that the turning circle of the Starfighter was as big as the American state 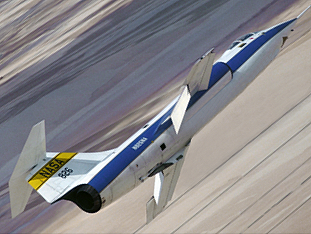 One special feature of jet-powered aircraft is that the thrust is generated by the recoil of the turbine alone, i.e. it is completely independent of whether the aircraft is in the air or on the ground. With a tow tractor, on the other hand, the traction is indispensable, so that it can literally transfer its power “to the road”. The fine art of building tractors therefore consists of accommodating as much weight as possible in a limited space in order to load the drive wheels to such an extent that sufficient traction is ensured even with unfavorable road conditions. For this reason, the vehicle frame of the VOLK Diesel Tow Tractor DFZ 150 H is made of centimeter-thick solid steel. Therefore, whereas steel panels weighing tons are generally used in tractor construction, the main emphasis was on uncompromising lightweight aluminum structures to build the F-104 Starfighter. It is therefore all the more surprising that both are to be found in the same weight class: the VOLK DFZ 150 H weighs 12.5 tons, whereas the Starfighter weighs in with a maximum take-off weight of 13.2 tons. The normal take-off weight is 9.4 tons. The weight category is therefore undecided. 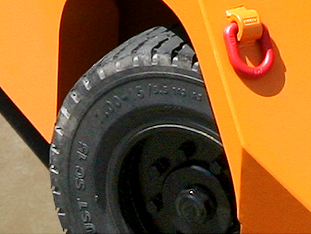 Area champion – The VOLK Diesel Tow Tractor DFZ 150 H has a turning circle diameter of just 7.31 meters, which is unique in this weight category

A conspicuous feature of the F-104 is its extremely short, trapezoidal, razor-sharp stub wings, which lend the jet more the appearance of a missile rather than that of an airplane. This radical design reduced the air resistance in the supersonic range and thus enabled enormous speeds and climb rates, but at the same time greatly restricted maneuverability. With an airborne weight of 13.2 tons and a wing surface of just 18 square meters, every square meter of wing surface had to generate a lift of more than 700 kg, which is only possible at a very high flying speed. However, on turns, there is a loss in lift due to the banked position that can only be compensated for by the pilot by increasing the pitch. This leads to a great increase in wind resistance and a reduction of speed as a result. Therefore, in excessively tight turns, a dangerous stall may easily result. As a consequence of its unique aerodynamic design, the Starfighter was hopelessly inferior to most other fighter jets in horizontal dogfights. To be frank: the turning circle of a Starfighter was as big as Texas.

The VOLK DFZ 150 H, on the other hand, did not have to be optimized for supersonic flight. Rather, during its development, it was possible to accommodate the requirements of internal transport tasks without having to compromise. Due to its very short length of only 3.50 meters and a vehicle width of just 1.90 meters, it takes up less road surface than a VW Polo. Compact dimensions and a large steering angle of 50 degrees result in a turning circle diameter of only 7.31 meters. Thus the VOLK DFZ 150 H can also be easily maneuvered within a very small space. The maneuverability category is therefore clearly won by VOLK DFZ 150 H.

Haste makes waste – The Perkins diesel engine of the VOLK Diesel Tow Tractor DFZ 150 H only has a comparatively modest 139 HP but it is still the clear winner of the pulling power category. 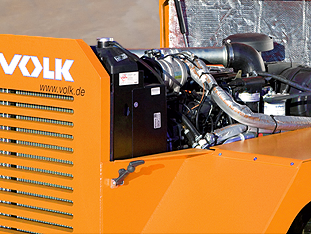 The VOLK Diesel Tow Tractor DFZ 150 H is serially equipped with an air-suspended driver’s seat with a maximum suspension travel of 80 mm. The complete driver’s cabin is suspended on hydraulic damper elements and therefore decoupled from the chassis, which reduces vibrations and noise. A mechanical suspension system with leaf springs on the rear axle and coil springs and shock absorbers on the front axle complete the ergonomic profile and ensure that the load on the driver is low as possible. In the Starfighter, on the other hand, loads of four to seven g were the rule in regular flight mode. Enormous centrifugal forces pressed the pilots into their seats during turns, when climbing and diving. Incidentally, instead of a comfortable seat, the Starfighter had an ejector seat: In place of air chambers there were pyro-technic detonator elements that were able to catapult the pilot out of the danger zone in emergency situations with an acceleration of up to 14 g. A pilot weighing 80 kg was then pressed into his seat with around 1.1 tons. Starfighter pilots were simply not allowed to have vertebral disc problems. This category is therefore also clearly won by the DFZ 150 H. 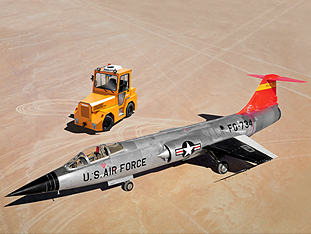 Duel of the giants – When two unequal opponents face each other, the results are sometimes surprising: the VOLK Diesel Tow Tractor DFZ 150 H has the greater towing capacity

In the 1970s, the Starfighter cost up to 4.5 million euro to buy, and with figures like that it is hardly necessary to convert to current prices. What’s worse: every hour in the air was followed by many hours of maintenance in the hangar. The maintenance costs per operating hour therefore often ran to four figures, which would probably make the hair of every fleet manager stand on end. The main service interval of the DFZ 150 H, on the other hand, is 1.000 operating hours. It is therefore clear that it also wins this category.

To sum up: two draws and three clear victories for the VOLK Diesel Tow Tractor DFZ 150 H with a surprising triumph in the category “Pulling power” speak volumes: for internal transport tasks, the DFZ 150 H is clearly the better choice. As mentioned above, this result was already clear beforehand; but now we also have a few convincing arguments in its favor. “Small children raise the level of reflection”, it was recently reported in the German newspaper Frankfurter Allgemeine Zeitung. You just have to make the effort to answer their questions seriously. We could not have put it any better.