Corus Packaging Plus in Llanelli, South Wales, performs internal transport tasks with VOLK Electric Tow Tractors of the type EFZ 30 N. The subsidiary of the Corus Steel Group manufactures tin-plate for beverage and food cans. Around 900 employees produce about 500.000 tons of tin-plate annually, which is exported to more than 50 countries.

Corus originated in 1999 as the result of the merger of the Dutch company Koninklijke Hoogovens with British Steel. It was taken over 2007 by the Indian Tata Steel Company, which has now risen to become the fifth largest steel company in the world. The Packaging Materials division has four locations in Europe, one of which is the plant in Llanelli. 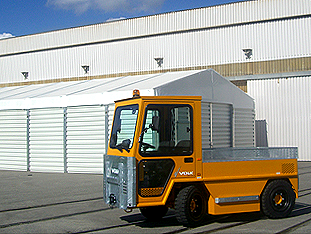 The basic material, hot-rolled sheet steel, is produced for the most part in the nearby Corus steel works in Port Talbot and then delivered by train. In Llanelli it is first cold-rolled into the final material thickness, then electrolytically tin-plated on a total of three production lines and further processed into corrosion-resistant tin-plate. The conveyor speed in these processes runs up to 500 meters per minute.

The internal transport of the extremely heavy steel coils is performed with VOLK EFZ 30 N Electric Tow Tractors. The 20 KW three-phase asynchronous motor and maximum drawbar pull of more than 20.000 N make them optimally suited for this task. With an impressive battery capacity of 80 V / 700 Ah and one spare battery per vehicle, the tow tractors are also outstandingly well equipped for the continuous multi-shift operation at Corus.

Llanelli is one of the four European locations of Corus Packaging Plus – the town has approximately 44.000 inhabitants 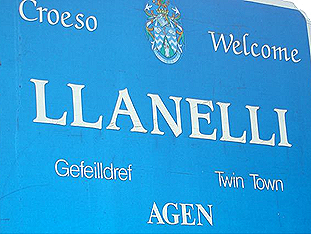 The high priority of employee satisfaction and work safety at Corus is also reflected in the extensive optional equipment of the vehicles. They feature, for example, a video rear-view system for an optimal view of the coupling area, inching controls with automatically engaged and released brakes on the vehicle rear side and a Rockinger 245B automatic trailer coupling which can be remotely unlocked from the driver’s cab. Thus hitching and unhitching procedures are not only made easier, but also much simpler and faster.

With 900 employees, Corus Packaging Plus in Llanelli is one of the largest European tin-plate manufacturing plants

The region of South Wales lies in the southwest of Great Britain and is internationally known for its university cities of Cardiff and Swansea. At the beginning of the 19th century, it was one of the centers of the Industrial Revolution in Great Britain and was shaped in the following years primarily by coal and ore mining. As was the case with other mining regions, South Wales experienced a steady decline beginning in the 1970’s, with the closing of many mines and steel works. One of the few companies which were able to resist this general trend was Corus Packaging Plus. Thanks to its deliberate specialization in higher-order value-adding steps, such as metal plating and refining, the company today enjoys great international success.