On December 9, 2017 the wait was over: The first regular-service ICE train to speed along the newly built Berlin-Munich route directly through the Thuringian Forest arrived in the Bavarian capital right on schedule at 11.02 a.m. It had left Berlin less than four and a half hours earlier. Before that, it had taken some 20 years and ten billion euros to construct the new high-speed line between the two major cities. VOLK Electric Tow Tractors were also involved in the project.

The route cuts through several mountain ranges, which is why not only countless bridges but also several tunnels are required to achieve top speeds of up to 300 km/h. One of the longest tunnels on the line, at 6.970 meters, is the Finnetunnel. It passes under the Finne mountain range between Herrengosserstedt (Thuringia) and Bad Bibra (Saxony-Anhalt). 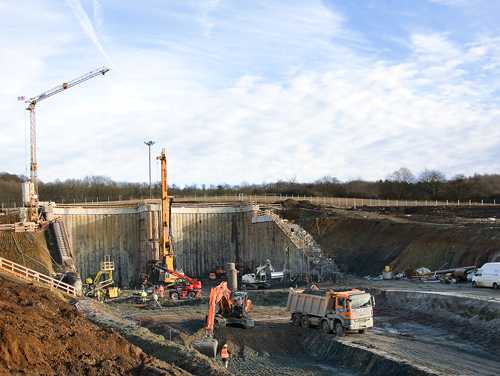 The West entrance of the Finnetunnel at the start of construction work – Today, passengers on the Berlin-Munich rail line are unlikely to even think about the effort that went into building the tunnel

The structure consists of two parallel single-track tubes with an average distance between them of 25 meters. The tunnel was cut using a method known as the shield driving process. Starting at the West entrance, two tunnel drilling machines ate into the mountain at an average rate of 16 meters per day. These machines pack a power of approx. 3.800 KW and are 86 meters long. Around 3.000 cubic meters of material was moved out of the tunnel every day on troughed belt conveyors.

Each of the two tunnel tubes consists of a total 3.400 segment rings – the tunnel drilling machines automatically assembled the seven reinforced-concrete elements of the tubbing ring 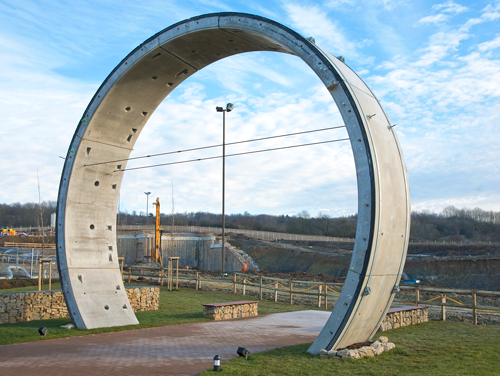 Just a few meters behind the continuously rotating cutting shield with its hardened metal teeth, the machine fully automatically installed the prefabricated concrete elements that form the tunnel shell. That is how the bare tunnel was constructed in a single work stage. Each individual concrete element is some five meters long, two meters wide, and 45 centimeters thick, and weighs around eleven tons. Together, six of these tubbing segments and one smaller key stone form a segment ring with an inner diameter of 9.60 meters and a width of two meters. The rings are screwed together and fitted with rubber seals that prevent water from leaking through. 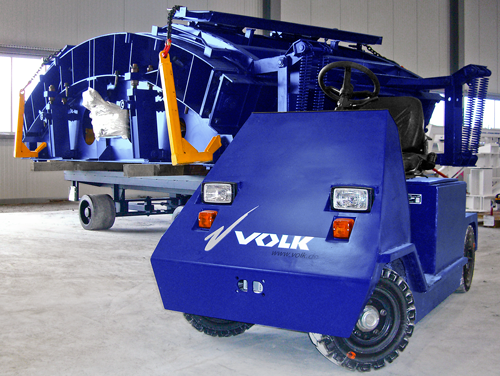 It took some 3.400 tubbing segment rings to build the Finnetunnel. Obviously, considering the vast dimensions, transporting these prefabricated concrete parts over long distances would have been massively expensive. That is why they were produced in a so-called field factory directly on the construction site. For this purpose, a production building with a production area of some 5.600 square meters was built near the West entrance. Day and night, special concrete was poured into steel molds to keep pace with the two tunnel drilling machines.

Two VOLK EFZ 20 K Electric Tow Tractors were used to transport the fresh concrete tubs, each weighing around twelve tons, from the concrete mixer to one of the 56 shell molds. Over the four-year construction period, each of the two tractors moved some 240.000 tons of concrete. The top priority here was absolute reliability. 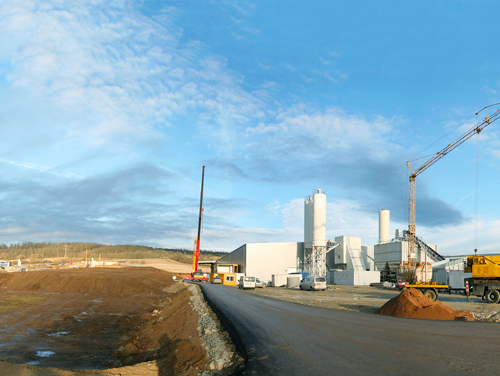 The field factory erected for producing the tubbing segments covered a production area of 5.600 square meters – it produced more than 100 segments per day in two-shift operation

The VOLK tractors were well suited to this task. Despite the tough requirements of the continuous two-shift operation, they performed their service reliably. Even the dust and dirt of the construction site did not affect them.