“Bigger is better” as they say in America. So it is a bit surprising that the largest airplane in the world does not come from the land of opportunity. We are referring here to the Antonov AN 225. It was developed in the 1980s as part of the Soviet space program as a transport aircraft for the Buran orbiter. The Antonov AN 225 was modeled after the American Boeing 747, which had been in regular use since the late 1970s to transport the American Space Shuttle back to the Kennedy Space Center in Florida, whenever it had to land in California or New Mexico due to bad weather. But the timing of the Antonov AN 225 was bad. When the first prototype was unveiled at the Paris Air Show in June 1989, it was only a matter of weeks before the fall of the Berlin Wall and the subsequent implosion of the Eastern Bloc. As a relic of the Cold War, the Antonov AN 225 prototype remained, until today, the only one of its kind. 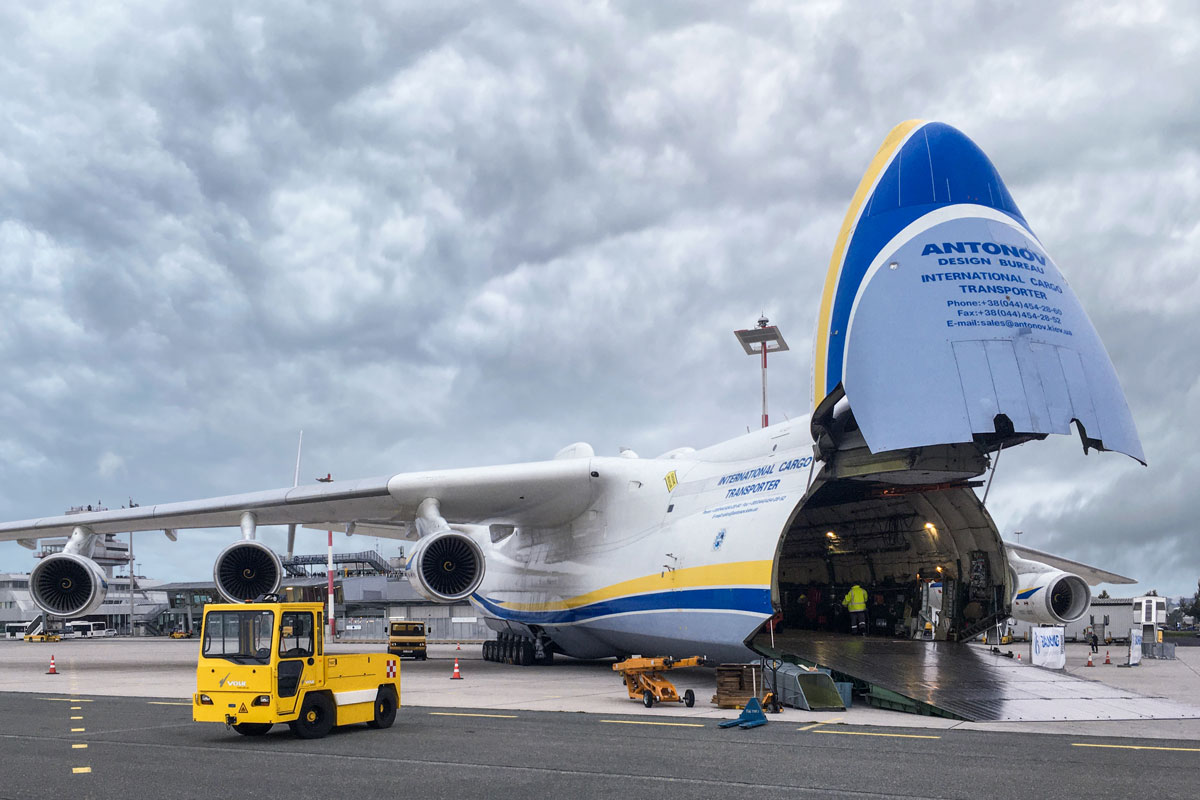 The maximum take-off mass of the Antonov corresponds to the weight of half a freight train
– Its cargo hold has the same volume as the swimming pool of a medium-sized district town.

To help visualize the dimensions of the Antonov AN 225, the Boeing 747 is a good standard of comparison: In its currently 8th stage of development, the American jet has a wingspan of 69.5 meters and a fuselage length of 76.3 meters. With its four engines, it has a maximum takeoff weight of an amazing 447 tons. The Antonov easily surpasses all these statistics: From tip to tip, its wings measure no less than 88 meters. It is also a good eight meters longer than the 747. But when it comes to maximum takeoff weight, the legendary Jumbo Jet is truly outclassed: The enormous thrust of six turbofan engines is enough to take off with up to 640 tons – a mass almost equal to that of half a freight train! With 1.200 cubic meters, the cargo hold has the same volume as the swimming pool of a medium-sized district town. 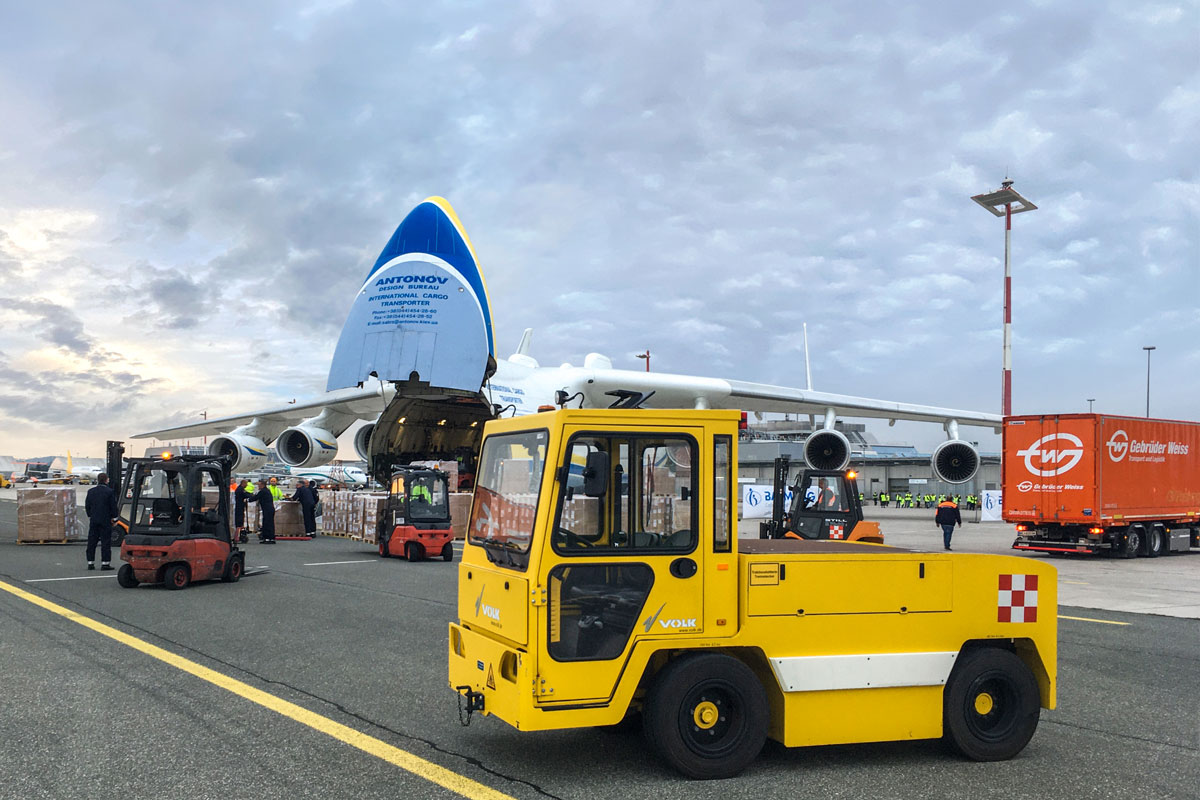 It is therefore no wonder that the only airworthy example of the AN 225 is still regularly used today to transport particularly heavy or large loads. It can be chartered to transport freight directly from Antonov Airlines. We last reported on a visit to Stuttgart a few years ago, where the mega-freighter’s cargo was handled by VOLK tractors. Recently, the aircraft – now featuring a new livery inspired by the Ukrainian national colors – paid a visit to Linz Airport. As in Stuttgart, VOLK tractors were also on site to handle the cargo.

Next to the Antonov AN 225, the VOLK EFZ 30 NT ULR electric freight tractors look like toys – and yet they also can really pull their weight: Their huge battery capacity of 112 kWh (80 V/1.395 Ah) gives them a virtually unlimited range and even then they have reserves to boot when the job, like unloading the Antonov in Linz, lasts until the middle of the night. With a drive power of up to 56 kW, they easily move the typical loads in the cargo business at 30 km/h, so the only thing that actually slows them down is the speed limit at the airport. Especially in the cargo business, where every second counts, the EFZ 30 NT ULR electric tow tractor ensures maximum productivity. With its quiet and emission-free electric drive, it is also ahead of the game ergonomically and ecologically. 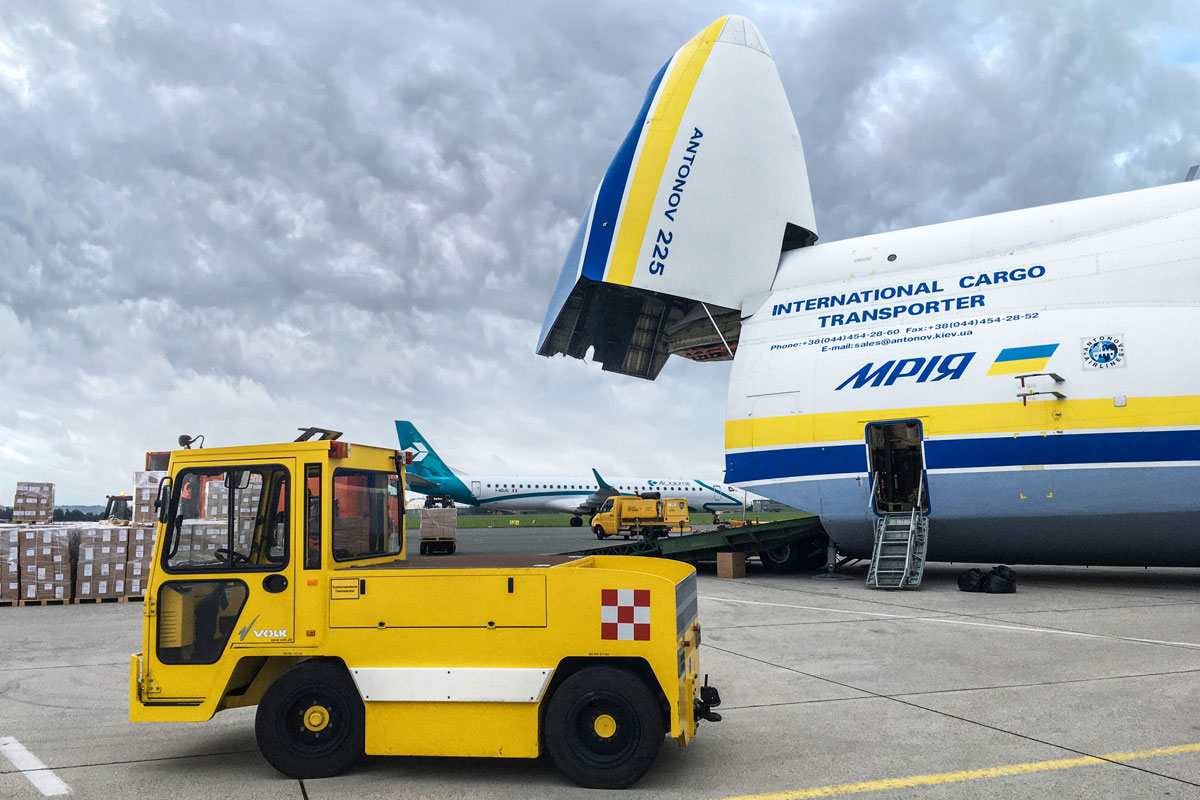 With its quiet and emission-free electric drive, the VOLK electric tug EFZ 30 NT ULR is one step ahead.

The world has changed particularly in regard to this last point since the Antonov AN 225 was unveiled in 1989. Not only in cargo handling, where environmentally friendly electric tractors are now being used more frequently, but above all in aircraft construction. When the Antonov took off again from Linz two days later, the crowd of onlookers witnessed the deafening noise of the engines and an exhaust stream that was blackened by soot particles. In this respect, too, it is a relic from days long gone.

Postscript – Now this proud airplane is history. In a maintenance hangar at Ukraine’s Hostomel airport, it was so badly damaged by a Russian attack in the first days of the war that reconstruction seems impossible. We’ll probably never see it again.